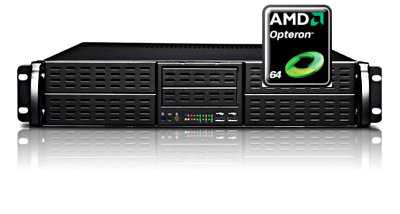 eRacks/SIXPACK
eRacks Open Source Systems announces a six-core AMD Opteron™ 2000 series (Istanbul) rackmount server, the eRacks/SIXPACK, a 2U computer system designed for peak performance and outstanding energy efficiency. The rackmount server can utilize up to two processors for a total of twelve cores in one system. The eRacks/SIXPACK is an ideal choice for a virtualization server or as part of a private cloud.

Orange, CA (PRWEB) July 16, 2009 -- -- Packing up to two six-core Opteron™ 2000 Series processors, the eRacks/SIXPACK rackmount server is designed for intensive multithreaded applications like virtualization, database, and web servers. The configuration boasts both optimized hardware for virtualization as well as eRacks' recommended open source software stacks, making the eRacks/SIXPACK a highly powerful and efficient server right out of the box. This system is an ideal choice as part of a private cloud.

The eRacks/SIXPACK's configuration is targeted to achieve a combination of high-performance and low energy consumption. AMD's refinements made on this new processor include power management improvements, reducing energy use and cost. AMD's HyperTransport™ technology incorporates a filter that lowers traffic between sockets, improving memory bandwith.

"The twelve core 2U eRacks/SIXPACK server uses less power consumption than a similar Xeon offering." comments Max Haskvitz, eRacks' General Manager. The eRacks/SIXPACK has a memory capacity of 64GB, and up to 12 TB of hard drive space.

All eRacks servers are configured to the customer's complete specifications including operating system, filesystem partitioning, RAID and even KVM, Linux Kernel Virtual Machine, the hypervisor built into the Linux kernel. eRacks is a certified Ubuntu partner.

The eRacks/SIXPACK base configuration starts at $2195 and is available online at http://eracks.com/products/SIXPACK.