eRacks introduces a server line based on the new 4100 series Opteron processors. These servers are the lowest cost per core in the industry. Available in full linux/BSD compatible setups, and with any option you can imagine.

The single 4100 CPU has either 4 or 6 cores per processor, which AMD brands as the "world's lowest power per core server processor." At 6 watts per core, twice as many servers can be implemented within the same power budget than the previous generation of processors. True to the spirit of AMD's latest offering, the eRacks/OPT4100 is power-optimized and affordable, providing unparalleled performance at a bargain. 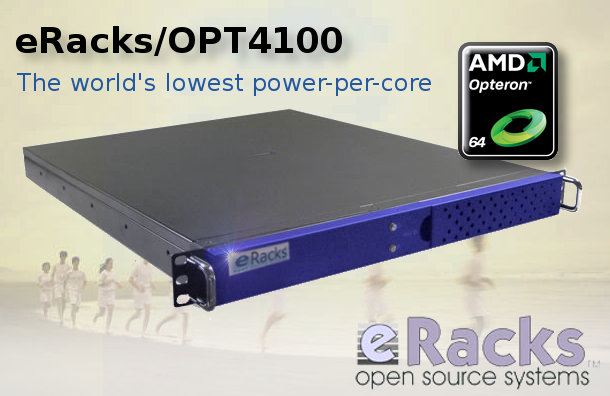 The eRacks/OPT4100 makes an ideal solution for scalable infrastructure servers including firewalls, web, mail, DNS or database servers, as well as for render farms, small clusters, social networking servers, and video streaming systems. On the low end, eRacks offers a quad-core Opteron 4122 clocked at 2.2 GHz with 4GB of RAM and a 250GB SATA 2 hard drive. For those with high-power requirements, consider the eRacks/ the hexa-core Opteron 4184 clocked at a whopping 2.8 GHz with 32GB or RAM and two 2TB SATA 2 hard drives.

eRacks Open Source Systems strives to return the control of the IT department back to the business owner, by providing quality open source enterprise-level applications on easily-upgradable industry-standard hardware. eRacks believes businesses should not be required to rely on third-party closed-source software vendors.

It's all about independence. Being your own leader. Working toward your own goals. Enjoying freedom of access, ability to customize, while remaining independent of restrictions, licenses, and vendor lock-in. That's why eRacks believes the future lies in Open Source software.