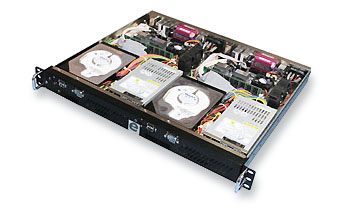 eRacks announces its latest line of fully-redundant dual firewalls, the TWINGUARD, TWINGUARD.PRO and TWINGUARD.ENTERPRISE rackmount servers. The Twinguard series minimizes risk in mission critical networks where failure is never an option. When one firewall fails, the other kicks in immediately, meaning no lost connectivity.

When a network must be online and maintained 24 hours a day, it's crucial to ensure that there are no single points of failure. Redundancy is vital for a firewall, one of the most important components in most networks. A failure in a firewall can spell sudden disaster, interrupting access to an entire network.

The eRacks/TWINGUARD runs the user's choice of OpenBSD or FreeBSD and utilizes CARP and PFSync software for full redundancy. Since OpenBSD and FreeBSD are open source, the eRacks/TWINGUARD, aside from bringing rock solid performance and reliabity to the table, also saves the consumer money that would have otherwise been spent on expensive software licenses. As an added benefit, users enjoy the added security inherent in openly developed software based on open standards.

eRacks has been on the forefront of technology for over ten years, and strives to ensure that the latest and greatest is always available to users of open source software. eRacks builds custom systems to order, and offers educational discounts and bulk discounts. For more information, visit http://www.eracks.com or call their USA-based customer service at (714) 532-5322.